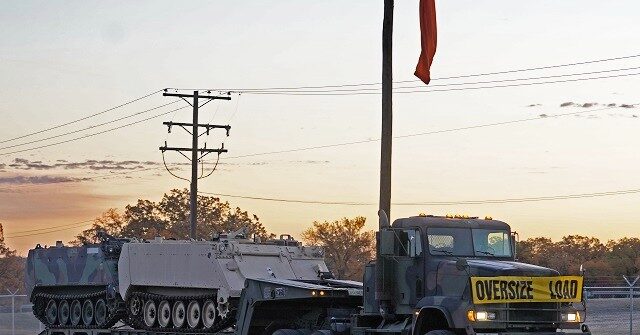 Texas Governor Greg Abbott ordered the deployment of ten M113 armored personnel carriers to the state’s southern border with Mexico. The action by the Texas governor is in response to the federal government’s anticipated ending of the Title 42 migrant expulsion protocol and the expected increase in border crossings.

The ten M113 armored personnel carriers (APC) left staging areas near Fort Hood earlier this week and are being transported by trailer to the Texas border region, according to information obtained from Texas Military Department officials.

“The personnel carriers are being trucked to security points along the border today. These will enhance protection for our forces in the face of increasing cartel-directed criminal activity,” TMD officials said in a written statement. “The lifting of Title 42 could lead to a massive influx of illegal immigrants allowing criminals to further exploit gaps where federal authorities are inundated with migrant processing.”

Texas military officials say the vehicles are needed to protect soldiers deployed under Operation Lone Star from increasing acts of violence in the border region.

Governor Abbott’s office added, “The personnel carriers are being trucked to security points along the border to enhance protection amid increasing cartel-driven criminal activity. The lifting of Title 42 later this month could lead to a massive influx of illegal immigrants, allowing criminals to further exploit gaps where federal authorities are inundated with migrant processing.”

Breitbart Texas reached out to Texas Military Department officials for more information about the mission of the M113s and if the vehicles will be armed with exterior weaponry. An immediate response was not available.

Texas Department of Public Safety spokesman, Lt. Chris Olivarez told Fox News, “With Title 42 in place, that’s really the only policy we have to sustain the situation we’re seeing on the border, but right now that’s hanging by a thread.”

“We’re going to have to deploy more state resources now to fill in those gaps amid the surge of illegal immigrants we’re expecting,” Olivarez added. “The cartels and the criminals know now that with Title 42 gone, that’s just more money in their pockets because they’re going to take full advantage of the situation, exploit that, and profit off these illegal immigrants.”

Breitbart Texas’ Randy Clark, a retired Border Patrol agent, reported exclusively that CBP officials stated the Department of Homeland Security “is not engaged in any substantive planning to confront the expected surge in migrant once Title 42 is lifted per court order.”

During the month of November, Border Patrol agents apprehended nearly 206,000 migrants who crossed the border between ports of entry, Breitbart Texas reported. This brings the total apprehensions during the first two months of the fiscal year to nearly 410,000 migrants in these nine southwest border sectors.

In addition to the apprehensions, Border Patrol reports reviewed by Breitbart Texas indicate that another nearly 140,000 140,000 migrants are classified as “got-aways.” This means more than a half-million migrants crossed the southwest border during the first two months of the year.

U.S. District Court Judge Emmet Sullivan, appointed in 1984 by then-President Ronald Reagan, ordered the Biden administration to discontinue the use of Title 42 to expel migrants. The judge granted a stay of his order until December 21.

U.S. Senator John Cornyn (R-TX) blased the Biden administration and DHS Secretary Alejandro Mayorkas for their failure to provide a plan for what is expected to follow the end of Title 42.

“We have not heard any plan out of the Biden administration for how they’re going to do the job without that authority because they simply refuse to use any other authorities, like expedited removal, in order to discourage people from illegally entering the country,” Cornyn said in a written statement. “Once Title 42 is gone, that will all change, and the consequences will be dire.”
The CBP source told Breitbart’s Randy Clark that Border Patrol officials are meeting with city and county leaders along the border. Officials in Eagle Pass responded that they have no ability to properly absorb another migrant surge.