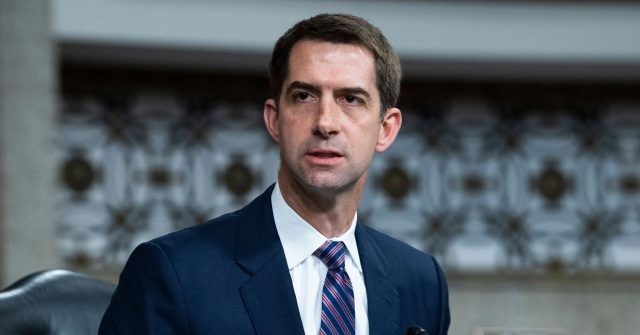 Sen. Tom Cotton (R-AR) said on Wednesday that conservatives should oppose the Journalism Competition and Preservation Act (JCPA) because it will lead to more censorship.

“The Journalism Competition and Protection Act (JCPA) lets the media form a cartel to negotiate w/ big tech. Conservatives should oppose special treatment for favored industries, and a cartel will lead to more censorship. Republicans should vote NO on the JCPA,” Cotton said in a statement.

Conservatives should oppose special treatment for favored industries, and a cartel will lead to more censorship.

Republicans should vote NO on the JCPA.

The Arkansas conservative spoke ahead of Thursday’s Senate Judiciary Committee meeting, in which the committee will consider the legislation.

After Klobuchar decided to delay the markup on the bill last week, the Minnesota Democrat said that “democracy relies” on the passage of the bill.

“I’m the daughter of a newspaperman, and I’m not going to stop fighting for local news. Our democracy relies on it. Chairman Durbin has committed to taking up our bipartisan bill in the Judiciary Committee next week,” Klobuchar said.

The Journalism Competition and Preservation Act, despite its moniker, would create an antitrust exemption for the media industry, allowing media conglomerates to negotiate with big tech platforms for more favorable advertising agreements.

Conservatives such as Sens. Cotton, Mike Lee (R-UT), Marsha Blackburn (R-TN), and others contend that the media industry should not receive special treatment and that the bill would lead to more censorship of free speech.

As Breitbart News Senior Technology Correspondent Allum Bokhari documented, lobbyists and other backers of the bill have said the bill would be used to curb “misinformation.”

David Chavern, the president and CEO of the News Media Alliance, said during one House Judiciary Committee hearing that the media needed to be bailed out because it “acted as a clear antidote to the scores of misinformation impacting communities across the country.”

During one Senate Judiciary Committee hearing, Lee quoted Bokhari’s Breitbart News article, detailing how the JCPA would be exploited to censor free speech:

These self-appointed mainstream and left-wing media cartels ARE allowed to exclude based on the usual, totally subjective, factors they always do, such as: “trustworthiness,” “fake news, “extremism,” “misinformation,” “hate speech,” “conspiracy,” “correction policy,” “expertise,” “authoritativeness,” etc.

Lee also said that the JCPA would likely violate the Constitution by compelling speech and could serve as an “Obamacare for the free press.”

“When you boil it all down, the JCPA is just a way to transfer wealth from a politically disfavored group to a politically favored one under the guise of supposedly improving competition,” Lee, a conservative who opposes the bill, said.