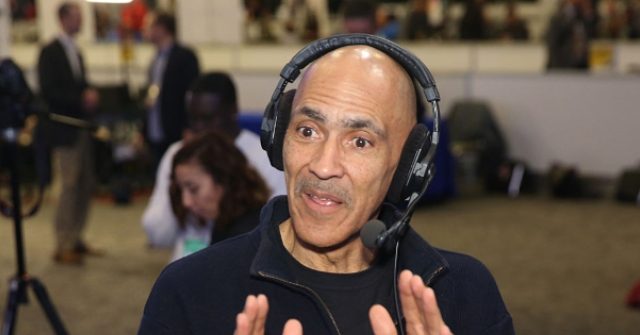 NBC’s Mike Tirico and Tony Dungy were both on the air Sunday night as Gruden’s controversy over racial emails ten years ago took over the discussion on Sunday Night Football.

As of Sunday night, only Gruden’s email to NFLPA President DeMaurice Smith, in which he said Smith had lips like “michellin tires,” was publicly known. However, Gruden had previously told the Wall Street Journal that he often refers to people who are liars as “rubber lipped,” and that was how he came to use that term with Smith.

That explanation seemed to work for Dungy.

“We heard Jon Gruden say he addressed this. He gave his side of it. He said that it wasn’t racial, that he was making a comment about DeMaurice Smith, and he basically attacked his character,” Dungy explained. “I will accept that and just say that it was an immature way to do it. It wasn’t the right way to do it. But it was 10 years ago. And I’m not going to chalk everything up to racism. I think we accept his apology, move forward, and move on with his team.”

Tirico, who was working with Gruden at ESPN when the email to Smith was written, defended his former broadcast partner.

“I think if I’m being honest with the audience, I should weigh in a little bit here,” Tirico said. “I was with Jon at that time — seven years as my partner on Monday Night Football. I probably know Jon better than anybody in the league on a personal level. He said it right — he was ashamed by the comments in the email. The comments in the email are wrong.

“But, my experience kind of parallels Tim Brown, who played for Jon. [Brown] said he never experienced or saw anything that would say Jon was racist in any way. That was exactly the experience I had, those seven years of traveling, three days together on the road together every week.”

Dungy and Tirico’s defense of Gruden was compromised, however, as reports of other emails written by Gruden, including misogynistic and gay slurs, became public.

In light of the new emails, Twitter users blasted Tirico and Dungy for their defense of Gruden.

Let’s conveniently overlook that prominent black folks such as Mike Tirico and Tony Dungy caped for Gruden hard on national tv, not to mention the unnamed black player who hugged Gruden in the team meeting and asked how he could help. https://t.co/Xb1O2RU4JA

Tony Dungy and Mike Tirico are rightfully taking all the Ls after camping for Gruden’s bigoted ass last night pic.twitter.com/xOqChLhNeq

In light of the newly revealed emails containing gay slurs, Dungy took to Twitter to revise his stance.

Now more e mails have come. More inappropriate, immature, wrongful attacks on the character of people from all walks of life. I don’t defend those either and given the apparent pattern of behavior the Raiders did the appropriate thing in terminating Jon Gruden.

That being said, if Jon Gruden shows TRUE remorse-and more importantly changes his mindset and actions-I would forgive him. As Christians that’s what the Bible commands us to do because that’s what God does for us. I know that’s not popular but it’s biblical. pic.twitter.com/yrhFU3i7o7

Gruden was 22-30 since returning to the sidelines as Raiders head coach in 2018. Gruden’s first head coaching job was also with the Raiders. A position he held until 2002, when he left to take over the Buccaneers.