Washington Post columnist Steven Pearlstein torched the Democrats’ so-called “Inflation Reduction Act” as being “no such thing” because politicians cannot simply turn a dial “to control employment, output, inflation — even the price of gasoline.”

Pearlstein said the economy is a complicated organism, and any politician who claims to be able to fix the economy by adjusting a dial “just right” is doing so based on a false premise.

“Democrats in Congress are embracing the same fallacy as they ram through a package of climate, tax and health-care initiatives fancifully marketed as the ‘Inflation Reduction Act of 2022,’” he wrote:

No less specious, of course, is the Democrats’ claim that inflation will be significantly reined in by a slimmed-down tax and spending bill that closes corporate tax loopholes, extends and expands clean energy tax credits, extends health insurance subsidies to the working class and gives Medicare the power to negotiate prices on a dozen overpriced drugs.

The Congressional Budget Office estimates that, over the next two years, the Inflation Reduction Act is likely to change the inflation rate by less than one tenth of one percent — but it isn’t sure whether the change would be up or down.

Even over the next five years, according to the Committee for a Responsible Federal Budget, the package moving through Congress would reduce the federal budget deficit by a piddling $25 billion — a rounding error in a $23 trillion economy. Regardless of the final number, the measure will hardly dent an annual federal budget deficit projected to run at the unsustainable rate of 5 percent of GDP over the next 10 years.

Democrats had to pass the bill before the media would report it’s all a lie. pic.twitter.com/II3RhdavHV

But the act will further exacerbate Joe Biden’s 40-year-high inflation. “The supposedly game-changing legislative breakthrough that brought together Sen. Joe Manchin (D-WV) and Senate Majority Leader Chuck Schumer (D-NY) after months of negotiations over Build Back Better failed is cynically branded as a measure to counter the budget deficit,” Breitbart News reported. “This makes sense in a crass political way because inflation is the number one issue facing American families and is plunging the economy into a stagflationary recession.”

The first hint that this is not going to be an inflation reducing piece of legislation is that the bill includes a massive expansion of government spending. There is roughly $385 billion in spending on energy and climate change, according to the nonpartisan Committee for a Responsible Budget. There is $100 billion of new spending for health care in the form of expanded Obamacare subsidies and expanded prescription drug and vaccine coverage.

Senate Democrats passed the bill with the rules of reconciliation, thereby circumventing the 60-vote filibuster that Republicans can use with a 50-50 split Senate. Vice President Kamala Harris cast the tie-breaking vote. The bill will now head to the House to be voted upon, likely on Friday. 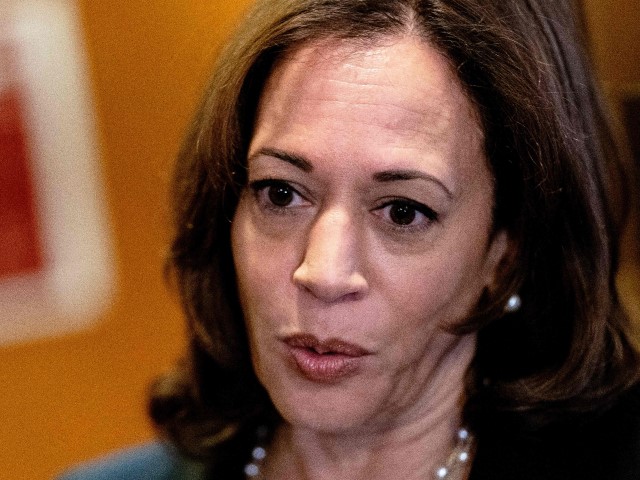 Vice President Kamala Harris speaks to reporters while departing the Senate Chamber at the US Capitol in Washington, DC, on August 6, 2022. (STEFANI REYNOLDS/AFP via Getty Images)