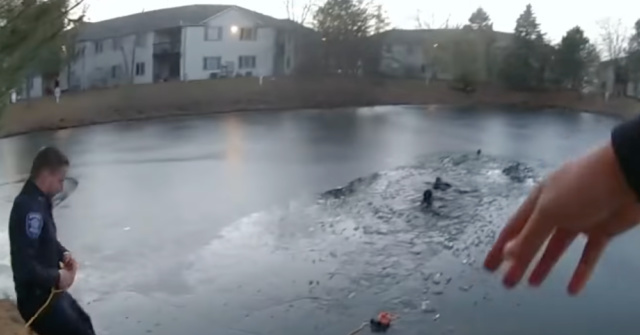 Police in Aurora, Illinois, rescued a nine-year-old boy who fell through the ice on a retention pond at an apartment complex on November 23.

When a 911 call came in about a drowning, Officer Andrew Soderlund and his partner immediately responded to the scene, WBBM reported Monday.

Once they arrived, the officers ran straight to the pond where the boy fell in, trying to get his football. They soon learned a woman who attempted to rescue him was also trapped.

“They were pretty far out there, and obviously, they weren’t making any way of getting closer to the shore,” Soderlund recalled.

He ran back to his squad car and grabbed a rescue kit. When he got back to the pond, Soderlund opened the box and pulled out a yellow rope, according to body cam footage of the incident:

TWO OFFICERS INJURED RESCUING A DROWNING CHILD Just before 4:30p.m. on Wednesday, Aurora’s 911 Telecommunications Center received reports of a 9-year-old drowning. Aurora Police officers and Aurora Firefighters were dispatched to the scene. When officers arrived, they found a 9-year-old boy who had fallen through ice and an adult woman who had gone in to attempt to save the child. Officers were able to determine the 9-year-old had entered a frozen section of a retention pond in attempt to retrieve their football. When the 9-year-old entered the frozen section of the retention pond, he fell through the ice into the cold water. Multiple officers deployed water rescue kits while two officers swam to save the drowning child and the adult female who were in the water. In a combined effort, officers were able to safely return to land with the child and the woman. The child sustained minor injuries and was transported to an area hospital by the Aurora Fire Department. Two Aurora officers who swam to rescue the child sustained minor injuries and were transported to an area hospital by the Aurora Fire Department. The female adult was treated on scene and was not transported. Everybody was released from the hospital in stable condition.

Once he tied the rope around his waist, Soderlund jumped into the freezing water and realized it was also deep.

“That adrenaline dump that goes on in a situation like that, I don’t remember the cold at all,” the officer recalled. “I originally started walking out. I was like, ‘Wow, this isn’t bad. I can stand up.’ And then, it just dropped. It felt like there was no bottom.”

The body cam video shows officers working to pull those in the water to safety with the ropes.

According to the Marine Corps Community Services website, people who fall into cold water should swim, paddle, move around, try to remain calm, avoid panicking, and keep their head above water.

The police department said the child and two officers were taken to a hospital after the incident and the woman was treated at the scene.

“Everybody was released from the hospital in stable condition,” the agency noted.

The boy got a big surprise on Thanksgiving Day when the officers presented him with another football.

Meanwhile, social media users applauded the responding officers, one person writing, “Amazing job! They acted without hesitation and knew exactly what to do to get the job done.