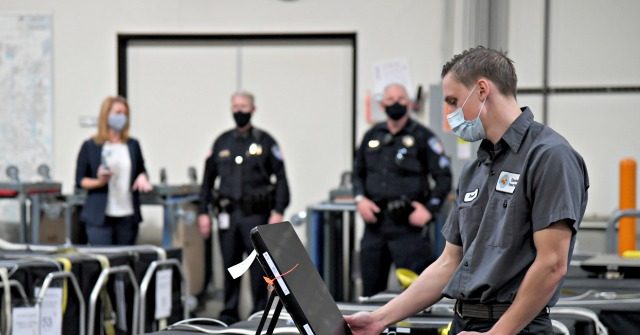 Wisconsin Special Counsel Mike Gableman asked the Wisconsin Elections Commission on Thursday to preserve “any and all records and evidence … including … information retained on any and all voting machines.”

On July 31, Gableman, who served on the Wisconsin Supreme Court from 2008 to 2018, was named Special Counsel in the investigation of the 2020 election authorized by Speaker of the Wisconsin State Assembly Robin Vos (R-63). One month later, on August 30, Gableman’s appointment was approved by the Assembly Committee on Campaigns and Elections in a five to three party line vote.

The Office of Special Counsel was formally announced one day earlier on Wednesday.

In Wednesday’s announcement Gableman “indicated his office had already engaged in witness interviews, retaining experts, and was preparing to initiate a compulsory process requiring further witness testimony and document production.”

On Thursday, Gableman followed up with a letter sent to Wisconsin Elections Commission Chairperson Meagan Wolf.

“I hereby request that you and your office preserve any and all records and evidence […] including but not limited to information retained on any and all voting machines,[such as] metadata, router information, and/or access logs,” Gableman wrote in that letter, adding:

Please forward to this office any information relating to any and all intentional or unintentional destruction of records between the November 3, 2020 election and the date of this notice, including otherwise routine software updates to election systems that might have in the past or will in the future corrupt or erase and/or otherwise compromise relevant records, or which might obstruct examination and investigation.

Wisconsin was one of several key battleground states in which Joe Biden was narrowly certified the winner in the 2020 presidential election. Wisconsin’s ten Electoral College votes were awarded to Biden and contributed to his 306 to 232 Electoral College victory, which was confirmed in a joint session of Congress on January 6, 2021.

Wisconsin was also one of several states at the center of the controversy over the private funding of election administration in 2020, as Breitbart News reported:

Private funding of election administration was virtually unknown in the American political system until the 2020 presidential election, when Facebook CEO and founder Mark Zuckerberg and his wife Priscilla Chan donated $350 million to the Center for Technology and Civic Life (CTCL), which provided funding to county and municipal governments around the country for election administration, and $69 million to the Center for Election Innovation and Research (CEIR), which provided funding to 23 state governments, primarily through the Secretary of State’s office, also for the funding of election administration.

The local election practices in those five large cities in the 2020 election are expected to come under intense scrutiny during the investigation conducted by Special Counsel Gableman.