There are a number of reasons right now that Wordle, a daily word puzzle, is a viral sensation that’s attracting fans from all over.

It’s simple, it’s fun — and it’s gloriously addictive, according to its most ardent fans. 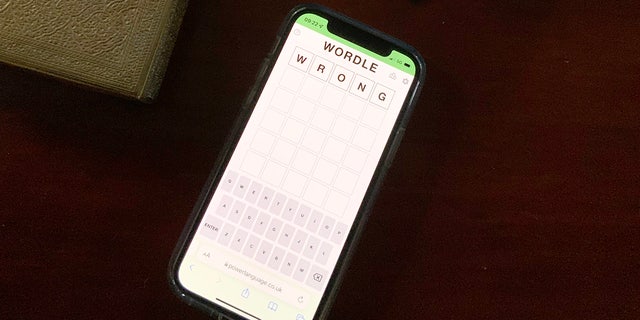 With Wordle, you get six guesses to figure out the daily five-letter word. (Fox Digital)

The object of Wordle is to correctly G-U-E-S-S the five-letter word-of-the-day in as few tries as possible.

“I love that you can play just one puzzle a day on the website with no nagging notifications to do more,” Kirsten W. Larson, a Los Angeles-based children’s book author, told Fox News Digital.

Larson became a fan earlier this week when “everybody in my Twitter feed and on Facebook started posting their scores,” she said.

<img src="https://a57.foxnews.com/static.foxnews.com/foxnews.com/content/uploads/2020/09/640/320/Wedding-dress.jpg?ve=1&tl=1" alt="Ever stop in the middle of a store or while doing some other errand to play Wordle? The viral word puzzle web-based game might be to B-L-A-M-E.“>

Ever stop in the middle of a store or while doing some other errand to play Wordle? The viral word puzzle web-based game might be to <strong>B-L-A-M-E.</strong>

What do all the Wordle colors mean?

Yes, let’s address those cryptic grids of colored squares — and why they’ve taken over your social media feed.

The green, grey, and yellow grids are players sharing their Wordle “trophies” without spoiling the game for others.

So how do you play Wordle?

Each guess, which must be an actual word, is followed by feedback indicating whether the letter you’ve selected is correct and if it’s in the correct position.

Green means the letter is in the word — and that yes, it’s in the right position.

Yellow means the letter is in the word, but not in the correct position.

Grey means the letter is a T-O-T-A-L dud.

Here are more Wordle F-A-C-T-S you must know!

1. Brooklyn-based software engineer Josh Wardle released his free, in-browser word-guessing game in the fall of 2021. The game reportedly went from 90 players this past November to 2 million just last weekend. (And the name Wordle, by the way, is a play on Wardle’s last name.)

3. Multiple copycat versions of Wordle were recently taken out of the App Store, Apple confirmed this week to BBC News. However, some similar-looking games are still available there. (Keep reading for more on this topic … )

4. A separate Twitter account called @WordleStats, established earlier this month, tracks Wordle’s Twitter mentions, the number of “hard mode” players, and the percentage of people who solved the daily puzzle in a given number of tries. (“Hard mode” players use previously revealed hints in subsequent guesses.)

5. Some 76% of players needed four tries or more to solve Wednesday’s puzzle; 3,017 played the game on “hard mode”; and 153,880 results were found on Twitter, according to WordleStats. (The WordleStats account says it is not affiliated with Wordle — but Josh Wardle himself, Wordle’s creator, follows the account and has shared tweets from it.)

6. On Friday morning, Jan. 14, 2022, Josh Wardle confirmed on Twitter that Steven Cravotta, a fellow developer with an app (that happens to be called Wordle) is hoping to donate the proceeds from his app to a worthy charity, “preferably a literacy focused nonprofit organization.” (Cravotta’s app saw a sizable uptick in sales when people began googling to find Wardle’s in-browser game but instead stumbled on the Cravotta app.)

7. You can use the same letter twice in your word puzzle, by the way — for example, P-R-E-S-S (this can trip up beginners).

GET THE FOX NEWS APP HERE

And note: There is only one official P-L-A-C-E to play Wordle.

There is no official smartphone or mobile app for Wordle.