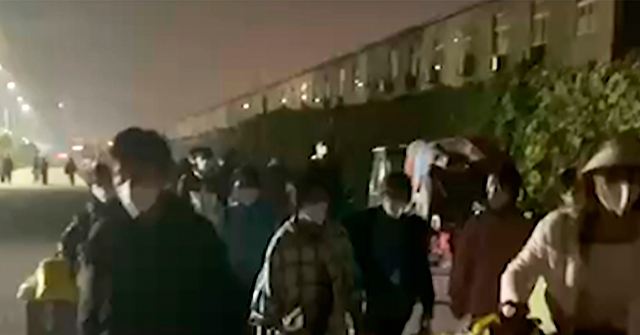 Workers at the massive Foxconn plant in China’s city of Zhengzhou, the largest facility in the world for assembling Apple iPhones, spilled out into the streets on Wednesday, clashing with hazmat-suited police and tearing down barricades.

The angry workers complained of poor living conditions inside the plant, where they are trapped under one of China’s manic coronavirus lockdowns, and said they have not been paid the meager bonuses they were promised for agreeing to remain on the job.

“We want to go home!”#Foxconn Workers shouted as riot police arrived at the scene.
In #iPhone city in #Zhengzhou, #CCPChina. Nov 23. See my previous tweets for more. pic.twitter.com/KbNndo8Xsc

Reuters noted video of the brawl outside Foxconn’s plant was broadcast live on Kuaishou, a Chinese video blogging platform similar to TikTok (which itself is banned in China, replaced by a Chinese-only alternative called Douyin).

“The videos showed over a hundred people clustered outside and coming face to face with dozens of hazmat suited officials, who they said were the police. Some showed workers complaining about the food they had been provided while others said they had not been paid bonuses as promised,” Reuters reported, adding that it could not confirm the authenticity of the clips.

Other videos described by the South China Morning Post (SCMP) showed angry workers pelting riot police with sticks and bricks, and destroying coronavirus testing kiosks with improvised clubs to chants of “smash it up.” One video showed hazmat-suited police savagely kicking a worker after throwing him to the ground:

This video circulating of the fresh clashes at #Foxconn would appear to show armed officials (presumably police) kicking protesting worker(s) after they go to ground. The #ZeroCovid crisis hitting the world’s largest supplier of #Apple iPhones continues. #China pic.twitter.com/4LnS1Z9mtn

“They changed the contract so that we could not get the subsidy as they had promised. They quarantine us but don’t provide food. If they do not address our needs, we will keep fighting,” one rebellious Foxconn employee said in a livestream on Wednesday.

The complaint about non-payment of retention bonuses is especially sad because the bonuses in question were pitifully small by Western standards – about $55 per day in U.S. dollars for workers who remained at the plant, or a $70 one-time “care and love pre-hiring bonus” for those who fled and agreed to return.

The Zhengzhou plant made global headlines in early November when footage of terrified workers literally climbing the fences to escape from the coronavirus lockdown was posted on social media. Fleeing employees complained about unsanitary living conditions inside the plant and said they were made to live in close quarters with associates carrying coronavirus, a complaint also made by the rioting workers on Wednesday.

Foxconn representatives told the SCMP the “violence” was emanating mostly from “some new hires” who complained about their “work allowances.”

Anonymous former employees told the SCMP plant managers unilaterally changed the terms of the retention allowance, requiring workers to remain at the plant for an extra month until March 2023 to receive their money.

These sources said the company was also still forcing employees to share dormitories with people infected by Chinese coronavirus, an allegation Foxconn denied as “patently untrue,” although every international media organization covering the protest seems to have found at least one worker willing to repeat it.

“Before new hires move in, the dormitory environment undergoes standard procedures for disinfection, and it is only after the premise passes government check, that the new employees are allowed to move in,” Foxconn insisted.

One of the former employees said conditions inside the plant were steadily growing “more terrible” despite Chinese state media reports depicting a harmonious workforce and increased productivity. In fact, Chinese state media claimed only yesterday that over 100,000 people rushed to fill jobs in the Zhengzhou factory during a massive recruiting drive.

The Chinese Communist Party’s vast army of censors is apparently hard at work suppressing reports of the Foxconn riot. TechCrunch reported on Wednesday that live streams of the event are vanishing in “real time,” within moments of being posted.

Aware of the heavy censorship, live streamers pleaded with viewers to share their videos in markets where Beijing cannot easily delete them, and advised each other to avoid taking steps that might trigger automated Communist Party censorship algorithms, such as including wide shots of large crowds.