House Republican leaders on Thursday morning unveiled to GOP members at a conference meeting the party’s new “Commitment to America” agenda, a core group of policies that fit on a pocket card designed to help them and their candidates communicate the GOP’s vision effectively in the midterm elections.

House Republican leader Kevin McCarthy and thirty or so of his colleagues will travel to the Pittsburgh area in Pennsylvania on Friday to formally roll out the vision to the American public, but members got a preview of it on Thursday morning in their conference meeting.

The agenda is the product of years of work from congressional Republicans to fine-tune through issue-specific task forces their vision on core issues like the economy, immigration, crime and public safety, education, and good government practices. It also represents one of the most aggressive moves by the GOP to date in terms of the party’s push to lean into culture war issues like immigration, crime, and national security as well as combating the radical left’s views on things like transgenderism and education.

Preamble by Breitbart News on Scribd

The two-page pocket card, published here, was provided to House Republicans at the conference meeting on Thursday, and then, on Friday, McCarthy will lead them in rolling it out for the public at a metal sheet working plant outside Pittsburgh. In addition to the pocket card, a one-page preamble lays out the GOP vision as well, explaining the problems Democrats have created while in charge in Washington and why the GOP is the better party for American workers and families to represent their interests in Congress.

The two sides of the pocket card are filled with GOP pledges on a variety of issues, and on the bottom of the back is a QR code that takes visitors to a website that will include the broader agenda from the Republican task forces.

This is the first time since 1994 when now former Speaker Newt Gingrich rolled out the “Contract with America” that House Republicans have unified behind a clear agenda ahead of the midterm elections. That vision in 1994 — rolled out on Sept. 27, 1994, on the East Front of the U.S. Capitol — led to a GOP wave victory that saw Republicans win power in the lower chamber of Congress for the first time in decades.

This vision, being formally introduced to the public on Sept. 23, 2022, a few days before Gingrich’s was, is meant to help guide and spur a similar wave victory — and then guide Republicans when they get into power around a core set of principles and operating procedures.

McCarthy had first discussed this in an exclusive On the Hill video special interview with Breitbart News recorded in December 2021 in Washington, DC — the interview was published in January 2022 — and now, the work is finally coming together. But just because the broader commitment to America was not published until now does not mean the engines feeding it — McCarthy’s task forces — have not been hard at work pumping out clear GOP visions on their specific issue sets.

The document opens by saying Republicans will fight inflation and reduce the cost of living by curbing wasteful government spending and offering regulatory reform that will incentivize job creation and higher wages. It also says the GOP will make America energy independent again and reduce gas prices.

While those seem like traditional Republican positions, from there, the document gets much more populist in that it promises Republicans will champion policies to “end dependence on China” and strengthen U.S. supply chains.

Next up, it talks about immigration and crime. Most notably, perhaps, the Republican Party formally embraces a national E-Verify program to bar companies from hiring illegal aliens over American workers in that it says Republicans will “require legal status to get a job.” It also says that Republicans will “eliminate welfare incentives” for illegal aliens.

On crime, the Republicans call for a national program pushing for the hiring of 200,000 new police officers from coast to coast with recruiting bonuses for aspiring potential officers. It also says Republicans will “crack down on prosecutors and district attorneys who refuse to prosecute crimes, while permanently criminalizing all forms of illicit fentanyl.” 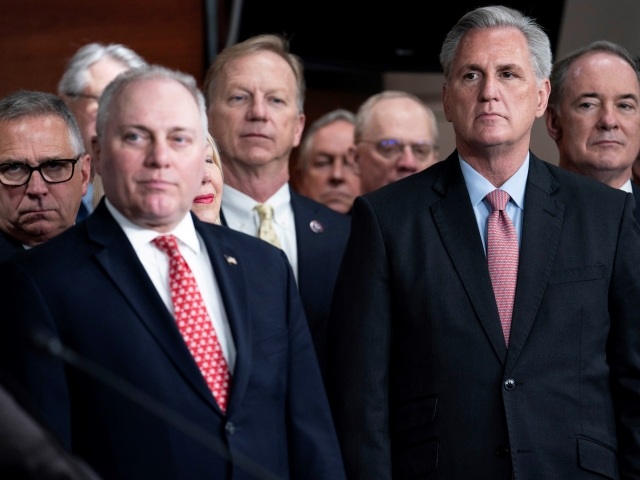 Under the national security section — still on the front side of the pocket card — Republicans call for the creation of a “Select Committee on China.”

The back side of the card begins with education, with Republicans promising the passage of a “Parents’ Bill of Rights” for school choice and for recovering from learning lost during the school closures due to the Democrat lockdowns during the coronavirus pandemic.

From there, Republicans directly confront the insanity of transgenderism. “Defend fairness by ensuring that only women can compete in women’s sports,” the Commitment to America document says.

On health care, Republicans promise personalized care “to provide affordable options and better quality, delivered by trusted doctors” and to “lower prices through transparency, choice, and competition, invest in lifesaving cures, and improve access to telemedicine.”

Republicans then promise to confront Big Tech, saying they will “provide greater privacy and data security protections, equip parents with more tools to keep their kids safe online, and stop companies from putting politics ahead of people.”

Under the next section, Republicans pledge to “preserve our Constitutional freedoms” and specifically say they will “uphold free speech, protect the lives of unborn children and their mothers, guarantee religious freedom, and safeguard the Second Amendment.”

Then they promise to “hold Washington accountable,” and pledge to “conduct rigorous oversight to rein in government abuse of power and corruption, provide real transparency, and require the White House to answer for its incompetence at home and abroad.”

The last section says the GOP will end proxy voting for members of Congress and push for election integrity measures including voter ID and poll watchers.