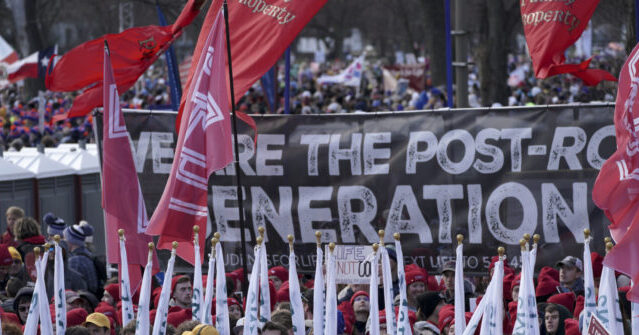 WASHINGTON, District of Columbia — As thousands of pro-life Americans gathered in the nation’s capital Friday to celebrate and promote life, many attendees told Breitbart News the Republican Party should be a stronger pro-life advocate.

The Republican Party is “definitely not” doing enough to advocate for the unborn, March for Life attendee Skylar Culbertson told Breitbart News.

“We’re seeing so many lawmakers compromise on the issue, and really, this is the greatest human rights issue of all time,” the College of William and Mary student continued. “I think there is so much more that can be done. … This needs to be put at the forefront of everything, in every law.”

Charleston, South Carolina, resident Steve Coffin and his wife, Paula, said the party “could be doing a lot better,” adding that “they could do so much more” like help fund and protect pregnancy centers and message to young women in particular that pregnancy is not insurmountable and abortion is not their only option, like Democrats and other pro-abortion advocates would have them believe.

“I definitely think they could do more,” college student Cassidy told Breitbart News. “Being from Michigan, I was really upset about Proposal 3 that passed. … I don’t think there’s enough going on right now because of the fact that that passed.”

Cassidy described a certain level of malaise among Republican voters, who might view the Dobbs v. Jackson Women’s Health Organization decision as enough of a win.

“You would think Republicans feel obligated to vote for that [Proposal 3], and I just think that there’s a lot of Republicans who aren’t voting because they feel really defeated, or they feel like there’s no point because it’s just one vote and it doesn’t matter and the Democrats are going to overtake it anyway, and that’s just simply not true,” she said.

While many said the GOP was not doing enough, they did say the party should be praised for the work it has been able to do — particularly through the presidency of Donald Trump and his appointment of Supreme Court justices Neil Gorsuch, Brett Kavanaugh, and Amy Coney Barrett, changing the makeup of the nation’s highest court.

“Donald Trump’s most impactful legacy will be the three Supreme Court justices that he appointed,” Stephen from Newport Beach, California, said. “That’s obviously due to the hard work of the Republican Party.”

“There’s a lot more that we could be doing, but I am really happy with the support that Trump had within the the past four years,” Cassidy said. “He was here, he was the first president at this rally, and I really supported that and I thought that that was amazing.”

“There’s always more that can be done,” Stephen continued. “So, it’s difficult because, on one hand, you can criticize, and then next you can praise. So, I think it’s just day-by-day understanding that, ‘Hey, we did great things.’ When Dobbs was handed down, I celebrated. I took that day to celebrate, and then the next day I said, ‘Alright, back to work’ because the fight’s not over, the fight’s just begun.”

The fight having just begun was one of the major sentiments felt by attendees of the March for Life. As Breitbart News reported, House Majority Leader Steve Scalise (R-LA) told those at the rally the Dobbs decision only marked the “end of the first phase of this battle,” saying that the next phase is only just beginning.

Rep. Chris Smith (R-NJ), an outspoken Republican on the life issue, assured pro-life Americans that the House leadership is “all solidly pro-life” during his speech at the rally.

However, the issue of abortion and Dobbs has been widely debated among Republicans and conservatives, with some arguing the issue saw the demise of the much-anticipated “red wave” in November, while others argue that it was the Republican Party’s fear of addressing the issue that contributed to the underwhelming performance.

The issue has colored part of the race for Republican National Committee (RNC) chair, the election for which will be held Wednesday.

Incumbent chair Ronna McDaniel is defending her seat against a challenge from attorney and Republican National Committeewoman Harmeet Dhillon.

While McDaniel holds the position that the RNC does not message on issues but rather is in charge of infrastructure, door-knocking, and get-out-the-vote efforts, Dhillon told Breitbart News that not messaging on the life issue is “bizarre.”

McDaniel blames the lack of messaging on the “consultant class” that staff individual campaigns, but she also told Republicans not to focus on abortion during the election, but rather economic issues.